Live your experience in Parga

Find your ideal accommodation from €30!

Live your myth in Epirus

Synthesis Car Rental from €28 per day!

Tours from Parga by road or by sea

A visitor to Parga will be inspired by exploring Epirus , the county to which Parga belongs. The versatility of this region is immense and if you have chance we would recommend researching the area before you arrive. The history alone will transport your imagination to the ancient times of the Gods of Olympus, Roman battles of Cleopatra and the Ottoman Empire , all of which have forged the character and spirit of the Epirot Greeks today.

The luscious mainland scenery will encourage you to appreciate that Greece is not a country only of islands.

Epirus in Northern Greece has a mountain range called Pindos. The highest peak is that of Mount Smolikas at 2637 metres, the second highest in Greece after Mount Olympus at 2917 metres. Just below the Pindos Mountain range is the beautiful National Park area of Zagoria where the village of Vikos has the deepest gorge in the world (in relation to it's width: Guinness Book of Records).

The refreshing greenery and serene rivers that encompass the Epirus villages are a pleasure and experience to tour and an amazing complimentary contrast to Parga's coastal scenery. 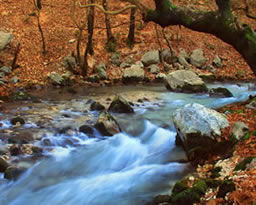 The stories of ancient Gods and heroes can first be met in the watery planes of Ephyra near Parga where the Oracle of the Necremanteon shows you the way to the underworld of Hades and Persephone.

The Acheron River that passes through the Ephyra planes is at its most beautiful at the village of Gliki . Here it is easy to walk through the Acheron gorge submersing yourself in the cool waters that are said to have mystical powers.

In ancient Greece, the greatest God of all was Zeus, God of the Gods and he was worshipped at Dodona, just outside the Epirot capitol Ioaninna, where an Oracle was dedicated to him. The Dodona Oracle was extremely famous and popular attracting many worshippers from all over Greece. To entertain the visitors an impressive amphitheatre was built in 3rd Century just next to the oracular buildings of worship. The site of Dodona lies in a tranquil valley and still todays prompts a feeling of nostalgia in visitors.

The might of the Roman Empire was felt in Epirus and in 31BC the bay of Acktion, next to the town of Preveza, saw the great Marc Anthony and Cleopatra challenge the resident Roman governor Octavius (soon to be Emperor Augustus) to a naval battle. Octavius was victorious and built the remarkable walled city of Nikopolis just outside today's Preveza to celebrate.
The turbulent history of Greece is felt strongly in Epirus and in 1400's the Ottoman Empire forced a 400 year occupation throughout the land. The intense patriotism of the Greeks ensured that Greek culture survived and even flourished despite these difficult times. 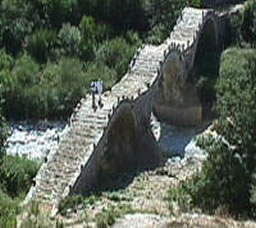 Turkish influence can be seen in the city of Ioanina where the Turkish leaders made their Epirot headquarters. As you travel through Epirus you can see the remains of Turkish mosques and minarets and more poignantly, the monuments to Greek bravery and loss.

We have 18 guests and no members online